Put Your Children First When Introducing Them to Golf

Start simply and make it fun, not a task

Being a golf professional, some of my fondest moments with my daughter growing up included golf.  She had an opportunity most children don’t; she spent her summers with dad at golf school.

She had an opportunity to hit balls, practice, play or work in the office.  She was never forced to golf; she did it when she chose to.

Today there are way too many parents trying to be Earl Woods.  Forcing your kids to play and practice is about the worst thing you can do.  When golf becomes a task it is going to be put on the back burner.

I will never forget playing in the state junior tournament when I was 15 years old.  I traveled to the event with another junior golfer, a very gifted player who ended up winning the event.  When he accepted the trophy he was asked if he enjoyed playing tournament golf.  He pointed to his father and said, “I hate it.  He makes me do it.”

As a parent please do not put yourself in that position.  By the way, that was a fun ride home!

Nevertheless, kids need instruction.  Here are some tips on how to go about it in the right way.

Keep introductory lessons as simple as possible.  Start with a high-lofted club like a 9-iron.  Put the ball on the tee at first so it is easier to hit because we want them to see the ball fly.  Show them no more than a basic stance and a modified grip.  With the grip, all I initially teach is to keep the left hand high and the right-hand low (opposite for left-hand players of course) and nothing else.

Below you see in photo A my daughter has a split-hand grip like a hockey player.  Most children will hold the club this way.  There is nothing wrong with this, in fact, it promotes the proper release and rotation of the hands and arms. 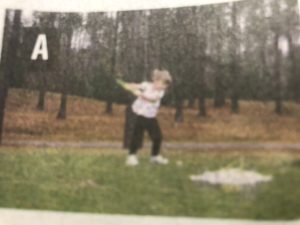 Your child is going to learn by example.  They are going to mimic what you do.  Did you know that Phil Mickelson plays left-handed because he would stand in front of his dad and copy his swing?  So don’t stand there and pound drivers.  Instead, hit little half swings, it is something they can do too.

Finally, take baby steps.  Don’t pull out your Hogan’s “five fundamentals” until they turn 12!  Kidding aside, teaching a child to golf is like putting together a puzzle: it works best one piece at a time.

In picture B you see my daughter as a 10-year old.  This downward move is pretty strong, but it took years to get there.  It did not happen overnight. 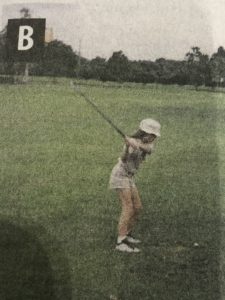 As a child, I never had the opportunity to attend a golf school.  To give others the opportunity I have had a Kids Free Program for more than 20 years.  As far as I know, this program has produced at least a dozen golf professionals, men and women.  Make Glen Davis golf schools a part of your vacation your child will not forget.