Having a surefire pre-shot putting routine is vital, but it is only half the battle.  The second part of a perfect putt is the stroke itself.  I am going to share with you a simple drill that will help you develop a repeatable putting stroke.

Good putters are able to control their distance.  They achieve this by being able to maintain a repeatable putting stroke.  In other words, the speed and motion of the stroke is consistent putt after putt.  Poor putters do the opposite.  Their speed varies putt to putt and in most cases, too much movement is going on in the wrists causing the stroke to vary putt to putt.

Here is the drill:

Find a flat, stable object such as a wall or a square fence post, as seen in picture A.  Then place a coin or a tee on the ground about four inches in front of the post or wall.  This marker will represent the position the ball would be in.  With putter in hand, address the market as if it was the ball.  We will now make a putting stroke striking the post.   The key to this drill is when the putter face makes contact with the wall it must be flush against the post as seen in both pictures A and B.  Hold the finish position a few seconds each time yo do it. 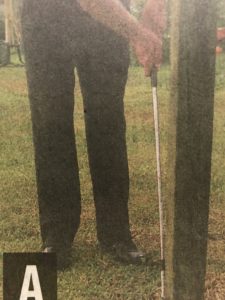 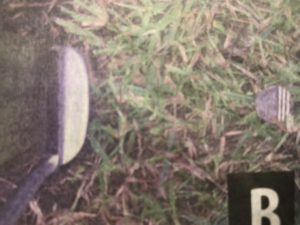 As you do this drill try to work on your pace of the stroke duplication speed each time as well as trying to keep the hands and wrists quiet as possible.  This will allow the arms and putter to move as one in both directions.

Understand that the purpose of this drill is to build a solid repeatable finish position.  This is going to put you in a much better impact position and teach you to accelerate through impact.  Also, look at the position of the hands in picture A: it doesn’t get better than that!  This is the finish position we want to be in on every putt we attempt.  Distance will be determined by the length of the our backswing, our follow-through stips at the post.

Have a great vacation here at the beach and make Glen Davis Golf Schools part of your vacation!